The marooned vibe is so palpable here it lured hit show Survivor to this 15-island atoll. Tapuaetai, “one footprint” in the local Maori dialect, is a short hop across the translucent lagoon, with a coconut palm-fringed shoreline you can trace in 15 minutes, but don’t rush, and don’t forget a footprint-shaped passport stamp from the hut turned post office. 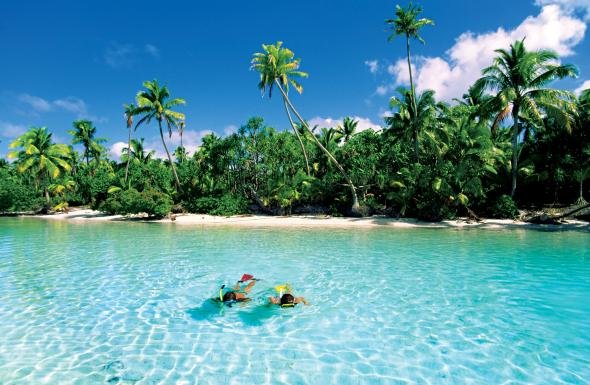 Aitutaki, also traditionally known as Araura, Ararau and Utataki, is one of the Cook Islands, north of Rarotonga. It has a population of approximately 2,000. Aitutaki is the second most visited island of the Cook Islands. The main village is Arutanga (Arutunga) on the west side.

Aitutaki is an “almost atoll”. It has a maximum elevation of approximately 123 metres with the hill known as Maunga Pu close to its northernmost point. The land area of the atoll is 18.05 km2 (6.97 sq mi), of which the main island occupies 16.8 km2 (6.5 sq mi). The Ootu Peninsula, protruding east from the main island in a southerly direction along the eastern rim of the reef, takes up 1.75 km2 (0.68 sq mi) out of the main island. For the lagoon, area figures between 50 and 74 km2 (19 and 29 sq mi) are found. Satellite image measurement suggests that the larger figure also includes the reef flat, which is commonly not considered part of a lagoon.

The barrier reef that forms the basis of Aitutaki is roughly the shape of an equilateral triangle with sides 12 kilometres (7.5 mi) in length. The southern edge of the triangle is almost totally below the surface of the ocean, and the eastern side is composed of a string of small islands including Mangere, Akaiami, and Tekopua.