On sunny days on Iceland’s south coast, Reynisfjara Beach’s ink black sand and basalt sea stacks are absolutely stunning. But don’t be lulled: “Powerful waves are known to knock people off their feet,” says Katie Hammel, who has worked at Iceland-based TripCreator. 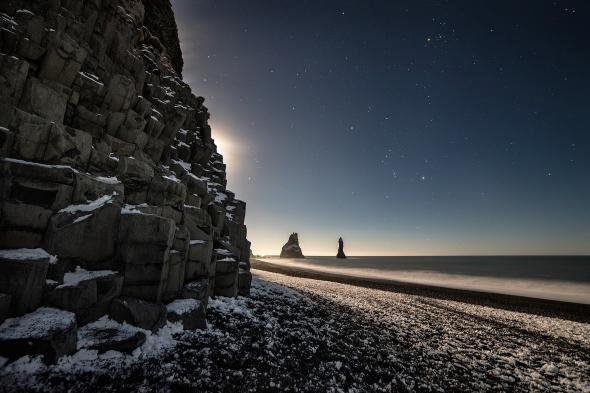 Reynisdrangar are basalt sea stacks situated under the mountain Reynisfjall near the village Vík í Mýrdal, southern Iceland which is framed by a black sand beach that was ranked in 1991 as one of the ten most beautiful non-tropical beaches in the world.

Legend says that the stacks originated when two trolls dragged a three-masted ship to land unsuccessfully and when daylight broke they became needles of rock.

Contemporary legends note the story of a husband who found his wife taken by the two trolls, frozen at night. The husband made the two trolls swear to never kill anyone ever again. His wife was the love of his life, whose free spirit he was unable to provide a home for; she found her fate out among the trolls, rocks, and sea at Reynisfjara.