This small cove gets its verdant good looks from tiny crystals called olivine, found in the rocks of the surrounding 49,000-year-old Puu Mahana cinder cone. Getting there requires a strenuous two-mile trek, but isn’t it worth it to leave footprints on one of the world’s few green-sand beaches? 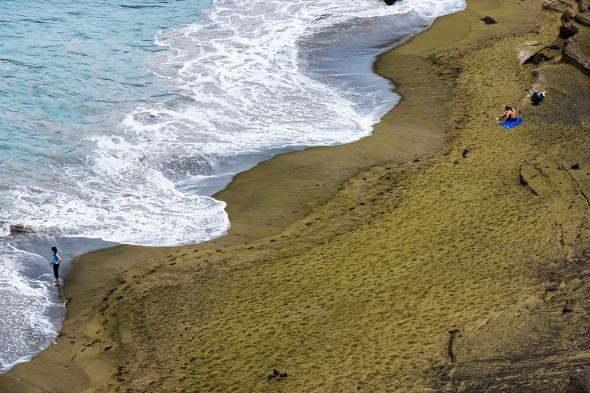 Papakōlea Beach is a green sand beach located near South Point, in the Kaʻū district of the island of Hawaiʻi. One of only four green sand beaches in the world, the others being Talofofo Beach, Guam; Punta Cormorant on Floreana Island in the Galapagos Islands; and Hornindalsvatnet, Norway. It gets its distinctive coloring from olivine sand eroded out of the enclosing collapsed cinder cone.

Papakōlea Beach is located in a bay half circled by Puʻu Mahana, a cinder cone formed over 49,000 years ago and associated with the southwest rift of Mauna Loa. Since its last eruption, the cinder cone has partially collapsed and been partially eroded by the ocean. The beach is sometimes named after the cinder cone, and sometimes after the area of land called Papakōlea, which comes from papa kōlea, which means plover flats in the Hawaiian language. Papakōlea is the area near the crater where Pacific golden plovers (Pluvialis fulva) are sometimes seen in winter.