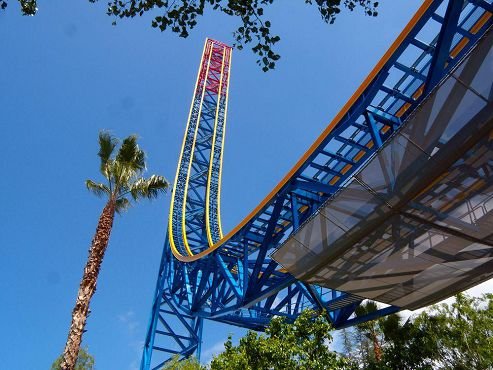 Until 2011, “Superman: Escape from Krypton” was known as a “Superman: Escape.” But after a new layer of paint and adding carriages moving backwards, the new super-hero rides of the world was born. Developing speed up to 160 km / h and rising to a height of 126.5 meters, the new “Superman” knows exactly how to get you a shot of adrenaline.

Superman: Escape from Krypton (originally known as Superman: The Escape) is a steel shuttle roller coaster located at Six Flags Magic Mountain in Valencia, California. When it opened in 1997, it was the tallest roller coaster in the world, and its speed of 100 mph (160 km/h) was tied for the fastest with Tower of Terror II, a similar roller coaster which opened two months earlier at Dreamworld in Australia. These two coasters were the first to utilize Linear Synchronous Motor (LSM) technology to propel vehicles to top speed. The park originally intended to open the ride in 1996, but the opening was delayed because of several issues with the launch system. The ride was closed in late 2010 for refurbishment, and it emerged in 2011 as “Superman: Escape from Krypton”. The refurbished ride featured new trains which face backward, and it was painted with a new color scheme. As of 2013, Superman: Escape from Krypton has the third-tallest structure, the fifth-fastest speed and the third-longest drop in the world.