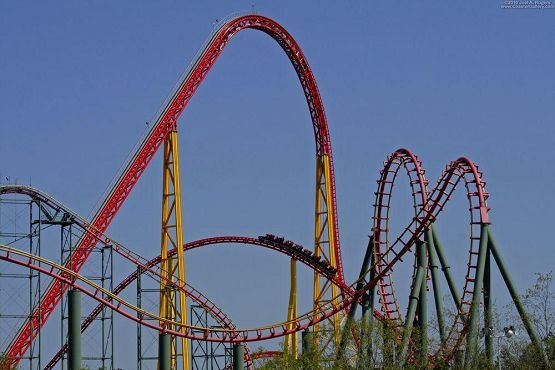 A relative newcomer to the world of roller coasters, “Zapugivatel 305” (already getting scared by one name …) in 2010, won the award “Golden Ticket” as the best new roller coasters.

Intimidator 305 is a steel roller coaster by Intamin at Kings Dominion in Doswell, Virginia, United States. Debuting on April 2, 2010 as the park’s fourteenth roller coaster, Intimidator 305 is located in the Safari Village section near Anaconda. Standing at 305 feet (93 m) tall and reaching speeds of 90 miles per hour (140 km/h), it is the second Giga Coaster to be built in North America – the first was Millennium Force at Cedar Point. The $25 million investment was the largest of any ride in the park’s history. It is named and themed after NASCAR driver Dale Earnhardt, the Intimidator.