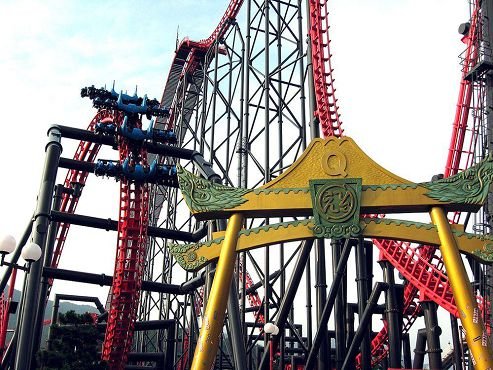 Yet another slide from the same park, but they are worth. These slides – with “bells and whistles”, and in the truest sense of the word. Eejanaika – the so-called 4D roller coaster that really means that apart from the usual ups and downs of loops at the same time … you get 360-degree rotating chair! Can the attractions to be even worse?

Eejanaika is a steel 4th Dimension roller coaster at Fuji-Q Highland in Fujiyoshida, Yamanashi, Japan. The ride is the world’s second 4th Dimension coaster, the first being X (now X²) at Six Flags Magic Mountain in Valencia, California, United States. Eejanaika is the taller, faster, and longer of the two.

The roller coaster, designed by S&S Arrow, is a “4th Dimension” coaster, a design in which the seats can rotate forward or backward 360 degrees in a controlled spin. This is achieved by having four rails on the track: two of these are running rails while the other two are for spin control. The two rails that control the spin of the seats move up and down relative to the track and spin the seats using a rack and pinion gear mechanism.