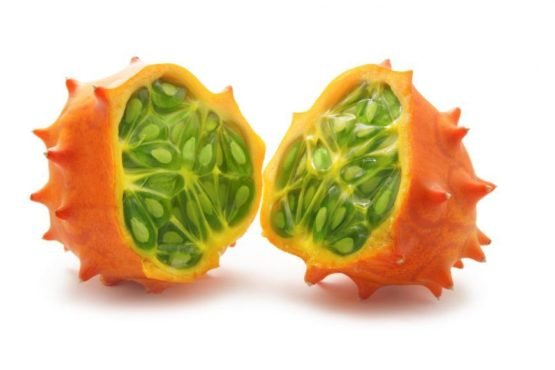 This jelly, melon fruit has an oblong shape and has a length between 5-10 cm. African horned cucumber tastes like a cross between a cucumber and lemon. Its juice is an excellent remedy for acidity, heart burns and eczema. The consumption of this fruit also helps to get relief from kidney, urinary problem and to regulate blood pressure.

C. metuliferus is a traditional food plant in Africa. Along with the Gemsbok cucumber and Tsamma it is one of the few sources of water during the dry season in the Kalahari Desert. In northern Zimbabwe it is called gaka or gakachika, and is primarily used as a snack or salad, and rarely for decoration. It can be eaten at any stage of ripening, but when overripened, will burst forcefully to release seeds.

The fruit’s taste has been compared to a combination of cucumber and zucchini or a combination of banana, cucumber and lemon. It is also said to taste like an unripe, watered-down banana. A small amount of salt or sugar can increase the flavor. Some also eat the peel, which is very rich in vitamin C and dietary fiber. The fruit can be used in cooking, but when eaten raw, most suck out the pulp and spit out the seeds.