The mangosteen fruit is very rare in Western markets. It is native to Indonesia, also found in few South Asian countries. The purple colored, mangosteen contains fruity part which packed inside a small shell. The edible part of mangosteen has a small triangular shape. This fruit is also very fragrant. 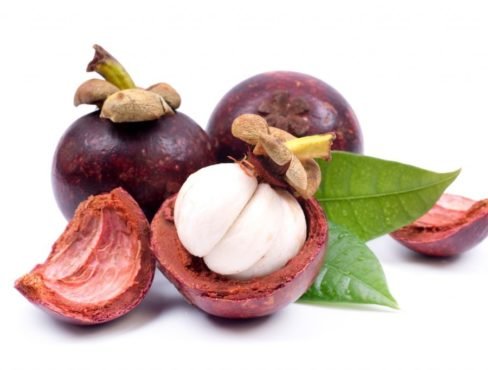 Mangosteen fruit contains no cholesterol and other types of fats. It is also a rich in vitamin C which help to prevent many infections. Mangosteen juice is one of popular drinks in South Asian countries in the summer season. The fruit also has few medicinal properties. Mangosteen juice help to reduce diarrhea, urinary problems and also can stimulate the immune system.

The purple mangosteen, colloquially known simply as mangosteen, is a tropical evergreen tree believed to have originated in the Sunda Islands and the Moluccas of Indonesia. It grows mainly in Southeast Asia, southwest India and other tropical areas such as Puerto Rico and Florida, where the tree has been introduced. The tree grows from 6 to 25 m (19.7 to 82.0 ft) tall. The fruit of the mangosteen is sweet and tangy, juicy, somewhat fibrous, with fluid-filled vesicles, with an inedible, deep reddish-purple colored rind when ripe. In each fruit, the fragrant edible flesh that surrounds each seed is botanically endocarp, i.e., the inner layer of the ovary. Seeds are almond-shaped and sized.

The purple mangosteen belongs to the same genus as the other, less widely known, mangosteens, such as the button mangosteen or the charichuelo.